Well, I had the opportunity to spend a couple days in Auckland this week, and let me just say: I love it already.

The flight was the easiest thing ever. Kylie and I walked ten minutes to our bus stop, and it took us directly to the domestic terminal. Checking our luggage and passing through security literally took a combined time of less than ten minutes, and the flight itself was just over an hour.

Since we were new to the area we didn’t know the bus routes, so we had to take a cab to our new place from the airport – that set us back about eighty bucks, but we didn’t have much alternative. However, after exploring the city for a few days, we now know the buses well enough to get back at a much cheaper cost.

Speaking of cheaper costs, our new room is about fifty dollars cheaper per week than our current place – yet it’s about five times the size; it has its own lounge, and the last guy in there left his TV and PS3 behind. YES.

Like I said, Kylie and I got out and explored the town. It’s exactly like Toronto, except about half the population, very little garbage in the streets, much less pollution and no homeless people. Okay so it’s the exact opposite of Toronto, whatever. It has its own CN Tower, of sorts!

Kylie and I had a nice meal at a restaurant to celebrate our one year, and then went to the casino. I will sum up that adventure by saying I did not win five grand this time.

We purchased essentials such as sheets and a blanket and some food to get by, and on Saturday it was back to Christchurch, where we saw Guardians of the Galaxy – awesome movie by the way.

Now just one more week of work at the pallet factory, and we’re off to Auckland for seven or eight weeks.

ALSO I bought a new ukulele so make sure to check out my Instagram/Twitter (links below) for covers!

Well, I am officially a New Zealand resident!

Okay that may be somewhat misleading. It wouldn’t even be amiss to go as far as to say it’s an outright lie. But all I’m trying to say, you guys, is that I officially have a place to stay. I’ll get to that, but first I’m gonna prattle on about some stuff I’ve been doing in my first few days in the land of Kiwis.

My days have been kind of strange, as my sleeping patterns have adapted to Kylie’s, somewhat. This means bed by 10 or 10:30, and when she gets up at 6:30 to get ready for school, I feel relatively rested. Even though I force myself to go back to sleep, I’m up by 9:30 – I’ve officially become a morning person, and I don’t like it. There are perks of a sort though: I can jump in and grab a shower before the flatmates, usually.

That’s another thing I’ve had to adapt to a bit – living (however tentatively) with other people. I haven’t had roommates since second year, and I’d kind of forgotten what it was like to share common areas, jockey for a position in line for the bathroom, and wear clothes when walking around. On the plus side, they’re all pretty nice people, and offer me conversation while Kylie is off doing whatever it is she does during the days.

My mornings are taken up by showering, writing, and sometimes watching Pokémon, while throwing back several cups of coffee. If you recall, the other day I wrote a post in which I said I was in a small coffee shop. That was a big success, finding it, as Kylie didn’t even know about it. On some of the other, rainy days, I’ve been staying in her flat and trying to learn how to play her ukulele.

Now, for those who don’t know, Kylie is a trained musician, and picks instruments up and learns them in about fifteen minutes. I’m fairly sure she borrowed this uke, mastered all there is to know about it in an hour or two, then forgot about it. I, on the other hand, have quite the difficult time at it. It doesn’t help that it has less strings than the guitar, which I can at least make noise with – oh, and also, it’s tiny. 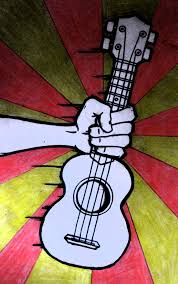 I downloaded a ukulele tuner and attempted to make the strings sound right, and I even looked up a bunch of uke chords. I’m still embarrassed by the sounds that come out of that thing when I attempt to play it, but hey, it passes the time. Also, on a funny note, I actually played Kylie’s flute before I saw her play it. It really takes me back to my elementary school days, when I played the flute for a few months before merciless teasing caused me to shift to the vibraphone (I don’t know what it is, either). After a few attempts, I was able to produce a noise on the flute, and even play a simple song. Afterwards, I attempted to play the flute’s midget cousin, the piccolo, also Kylie’s, but couldn’t make much more than a high pitched screech. At this point, I became a bit lightheaded, and thus retired as a flautist and…piccoloist…forever.

On Sunday, I browsed probably a thousand apartments online. Most of these – actually, pretty much all – were rooms in a house. I must have sent out a dozen enquiries and texts, and got a grand total of one response. This was a text asking if I was here for an entire year. When I responded that I was not, I apparently failed the test, as I never received another text. On Monday, I texted another place that looked pretty good, and within five minutes, the lady had messaged me back with details. It seemed decent – not too expensive, fairly close – so I agreed to stop by for a showing at 4 p.m. This gave Kylie time to get home and ready, as she wanted to come too.

The room was pretty good (pictures to come later) and the other residents seemed nice enough, so after conferring with Kylie, I paid the lady and became a real man.

I’ve yet to move any stuff in, but I’ll be doing that tomorrow. This is good, because having an address is critical to some of the other stuff I’ll be doing this week – getting an IRD number (necessary to work here), getting a bank account (for the inevitable dozens of dollars I’ll make from sheep-shearing or whatever), acquiring a bus pass, and for getting my guitar shipped to me.

Otherwise, Kylie and I have been sticking to our traditions – we saw a movie the other night (Captain America: Winter Soldier) and today we had sushi.

Other than that, I’m still getting into the routine of things, and trying to figure out what to do with all this spare time I find myself with. Tomorrow, I also begin writing the next “Hunger Games”/”Divergent”/”Harry Potter” etc. thriller. Maybe.