So where did I leave off? Oh, yes. I was communicating via Twitter with Jess Brown, a movie actress. Sure, it wasn’t the same as officially meeting her in person, but I mean, what are the chances I’d actually get to meet an actress? Twitter was probably the best I could hope for.

And it was. Until the Thursday of that same week.

Thursday, October 11th was the inaugural International Day of the Girl. Brescia University College was hosting a day-long workshop for grade seven and eight students from around the city. I went as a reporter for the Gazette.

While I was there I got to witness an inspiring play and the introduction of a new scholarship by our MP Susan Truppe. The most exciting part of the day, however, was the special guest.

For those of you who haven’t already recognized her and jumped out of your seat, or screamed with jealousy, or both, that is Evanna Lynch, the actress who played Luna Lovegood in the Harry Potter series.

She was greeted with tumultuous applause, of course, and gave a very good speech, focusing on how women are strong and don’t need to do anything extraordinary—her example was “pulling a sword out of your vagina”—to prove it. 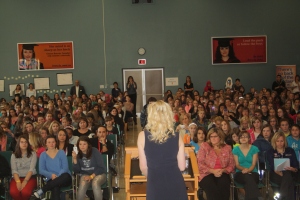 Evanna speaks to a crowd at Brescia.

Afterwards, the media was lucky enough to be able to go to a secret room in the heart of Brescia to speak to Evanna. Of course, CTV News jumped in first—while they were interviewing Evanna, I asked one of the Brescia conveners if I’d be able to do a one-on-one with the actress. The lady said that’d be more than fine. I was excited.

When CTV was done, the lady said that we could each do a short one-on-one, and since I had asked first, I got to go first. I approached Evanna—nervously, I’ll admit; I was sweating buckets at this point—and she asked if we could sit on the couch. I obliged.

I introduced myself and shook her hand. A moment later, after fighting through the awe I felt at actually having shook Evanna Lynch’s hand, I got a pretty awesome five-or-so-minute interview with her. It was a wonder I could focus, with her stunning blue eyes drawing mine like…well, like magic. All said and done, she is a very pretty lady.

(You can listen to the full interview here!)

When I was done, I knew what I had to do. I asked for a photo. She obliged. The representatives from the Big Purple Couch were standing by, and one of them was nice enough to take a few shots for me. Check this out, and be green with envy: 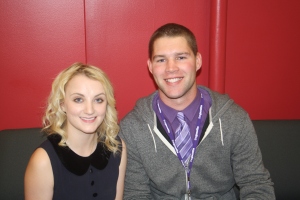 As I got up to go, I went for broke and lightly touched the small of Evanna’s back, while I thanked her for her time. It was thrilling. I haven’t washed those three fingers since then—so that’s about, oh, six days or so.

And that’s my magical adventure. That’s definitely the closest I’ll ever get to being a wizard, and I’m happy with it.

My interview and a couple photos got into an issue of the Gazette—check it out here.

Next blog post will be Friday—that’s because it will contain pictures of an event I partook in on Sunday, but I can’t post the pictures yet. Stay patient, you beautiful people.

Follow me so you don’t miss any sweet updates!

My glorious return, and rise to movie stardom

Okay, yeah. It’s been quite a while since I posted. It’s not my fault, though—there just haven’t been all that many exciting occurrences in my mundane existence.

Last week, though, that changed, so I felt like this could be a good time to make my triumphant return to the blogosphere. Read on, but I warn you—before this is through, you’re going to be pretty jealous.

I’ll start by taking you back to Thanksgiving weekend. It was the usual stuff—dinner with the fam, eating a lot, regretting it, you know. There was also the added mix thrown in with my sister’s birthday falling on the Saturday, so we ate even more. Cool.

The real adventure started on Monday—my demanding sister pretty much ordered me to drive her back to her residence at Laurier early, so she could study before her (apparently loud?) roommates returned. There was no point in going all the way back to the folks’ home after dropping her, and thus I found myself back in London around 2:30 in the afternoon on Thanksgiving Monday. No one was there, nothing was open, and there was nothing to do.

Or, well, almost nothing.

In a rare perusal of the internet, I found a posting saying that there was a movie (a multi-million dollar Hollywood flick, no less) being filmed right here in little old London, Ontario. The premise of the movie, tentatively titled “Tapped”, centers on an underground fighting tournament. That’s all I really know—but the movie was calling for extras. Since I had nothing to do, and I’ve never been an extra before, I decided to go check it out.

I bused down to the old library, where I got a great start by going in the wrong door. Luckily, a nice lady took me where I needed to be, and I signed away my life. After going through an inspection—no brands or wristbands or sunglasses allowed—I was led to the set.

It was amazing what they were able to do in the basement of an abandoned library. You could actually believe you had wandered into an underground fighting ring.

At the guy’s instructions, I sat with a crowd of other people, thinking I’d stick around for a scene or two then take off. However, my plans soon went awry.

By some stroke of luck—or perhaps the sexy pleather jacket I was wearing—I got scooped out of the crowd by who I later learned was the director of the movie. He brought me over to where all the cameras and equipment were and positioned me against a wall. His instructions were simple:

“When the camera draws back in front of you, walk past it and go over there and cheer.”

Wait, what? Walk past the camera? So I’m going to actually be in the movie? Action was called, and I nervously waited for the camera to pass me. I guess it was sort of an entrance-to-the-club scene, because it started with some dude coming up the stairs, followed by some chick and another dude, who stop to talk with the security guard. As that happened, the camera cleared my path, and I went. I made sure to look at the fight kind of in the general direction of the camera, hoping it’d be enough to get my face on the big screen.

The scene went well, but we did do it a bunch more times. I got to see playback of that first try, and I was pumped to see that not only does my face show on camera, it actually follows me as I disappear into the crowd. Bam!

We filmed it from a bunch of angles. The second time, I had to depend on the girl coming up the stairs for my cue. I accidentally bumped into her once, but she actually apologized to me. Did I mention she was a stunner?

…weird that it took me that long to say. Well, she was. I assumed she was another extra, until, out of the blue, some lady runs up and brushes her hair, and asks her if she’s warm enough.

Gulp. No one offered to brush my hair, so I had to assume that this lady was more than a mere extra. And I had bumped into her. Oh my.

After the entrance scene, the rest was pretty much just standing in a crowd cheering. Well, miming cheering anyways. I kept glancing around, hoping for a peek of this mystery actress. I did manage to spot her a few times, but she was always busy—acting and whatnot.

Eventually one of the other extras informed me that the lady was in fact the lead actress, and the other guy with her was the lead actor. Or, I guess they’re both called actors these days. Whatever. Tomato tomato, right?

Obviously this was exciting, knowing that my first extra scene was one with the two leads. Hopefully that means the chances of actually getting onto the big screen are good. Cool. Coolcoolcool.

(Side note—I got into “Community” recently. If you’ve seen it, you’ll appreciate my periodic references; if not, just assume anything I say that offends you comes from it.)

The cast broke for “lunch” at 9—I was pretty tired by this point so I called a wrap and went home. I decided to do a little research and find out the lead female actor’s name. It was a bit difficult at first—all the articles I found about “Tapped” focused on the other stars—namely the MMA fighters. I prevailed, though, and eventually found out her name—Jess Brown. She’s not that well-known yet, but I think she will be a household name in no time.

Anyways, I found out her Twitter and tweeted something like “Best part of being an extra was getting to walk in front of Jess Brown.” I didn’t expect anything from it, so you can imagine my surprise when she tweeted me back.

She actually seemed to remember me, because she opened her tweet with something like “Hey, purple shirt?” So that was pretty cool.

We actually tweeted back and forth for a bit, and of course I had to tell all my friends that a movie star was actually having a conversation with me. She even added me as a connection on LinkedIn—so, we’re like, professional connections now too and everything.

That about wraps up the “Tapped” story. I actually have more exciting stuff to talk about that happened last week, but this post is already pretty big (that’s what she said).

I’ll type up the next one tomorrow—don’t miss it, because it’s…magical.

And while you’re doing what I tell you, you might as well giver her FB a like, too:

And don’t worry, I’ll let you know when the movie comes out so you can see me in my cinematic debut.